Little Chrissy and the Furballs

Eight Balls of Fur is a silly Sesame Street song that is a parody of Jerry Lee Lewis's rock and roll song Great Balls of Fire. This music video is for singing about 8.

1989?-2005, 2011
We begin with a set of two stage platforms in front of a black background with what look like sparkling lights Then as the music begins,the eight furballs appear on stage one by one and a bunch of glowing eight shaped lights appear behind them. As the first verse begins, they start to dance...well, more like roll around with Little Chrissy playing a piano. The furballs then jump onto the stage, revealing that they have legs and yellow feet. During the chorus, they perform a dance move where they bob up and down with the beat, and the girls in the audience can be heard screaming. Chrissy then belts out the second verse while keys begin to fall off the piano. We go back to the furballs who stand straight up as their numbers are called (from one to eight) and then begin swaying back and forth. After a little more dancing, the camera cuts back to Chrissy as he furiously digs into the piano with the music getting more intense, and even more keys fall off the piano. After the music climaxes, Chrissy hits the third verse, and the camera cuts back to the furballs for the chorus. Chrissy then loses it and begins hammering the piano, even playing it with his back, while the furballs keep dancing. Suddenly the music takes a dramatic turn and begins building again, getting louder and more intense than last time. The eights in the background begin flashing like in a disco. The furballs start easy, then get into their most frenzied and "furocious" dancing yet, kicking their feet in the air, stomping all over the stage, and jumping like crazy while the girls in the audience go wild. After the final chorus, Chrissy begins tearing up the piano, finishing the song by ripping it in half, with the lid and keys flying into the air. After asking for a new piano to be brought in, seeing as that the first one is in pieces, some furballs approach Chrissy, and he tells them to "take eight" as the furballs leave the stage, with the audience screaming.

The furballs are the subject of the song's lyrics and they dance along to the beat. They are described by the lyrics as being "bushy as a lion's mane" and "made of fur". It is also said by the lyrics that they "love to boogie" and "got the soul for rock n' roll". As for what they look like, basically put they are literally balls of fur! Their fur looks really thick, shaggy, and monster-like and seems to move quite a bit when they dance. Each ball's fur is also a different color. They have no faces, arms, or hands. They each have a pair of thin, flexible legs covered in rainbow striped socks, and a pair of feet that are round and yellow in color. They appear to be very nimble, agile dancers, performing a wide variety of moves. They even have the ability to jump, as they are shown jumping from behind the stage during the first verse, and during the musical climax when the Eights are flashing. They do have coordinated moves, but then there are times where the furballs improvise and begin dancing independently of one another.

They are very unique muppets as they are never seen on Sesame Street in anything other than "Eight Balls of Fur". There are similar muppets such as the Muppaphones or the furballs from a Trash Gordon segment (ep. 4119), but no relation if any is known, added that none of those furballs have legs or feet.

Its not known for certain how they are puppeteered, but it is theorized that there is only one performer per furball. There seems to be one large rod controlling the body, and two small rods connected to their feet. There are parts in the video where a sort of glove connected to the feet rods is partially visible. As far as who puppeteered the furballs, there is a listing that shows the puppeteers that were involved, however there is no way yet to confirm the accuracy of it.

There are a bunch of glowing lights that look like the number 8 in the background behind the stage. Later on in the song, they begin flashing in time with the music. There is also various sound effects like cracking wood, piano keys falling, a screaming audience, and there is even a sound for the furballs feet as they tap on the stage. The origin sounds for these is not known.

A high pitched sound effect at the end of the song, when the piano finally falls apart, is listed as the "piano crash, fall downstairs" sound effect from the sound effect album "Crashes, Collisions and Catastrophies".

Eight Balls of Fur has been appearing on Sesame Street since 1989, in the following episodes to date:

It has also appeared in the following video releases:

Apparently this song has also appeared in stage productions of SS Live's "Sleeping Birdie" back in the early 90's.

Strangely, this was also shown on the repeat of the 2006 Sesamstrasse episode "A summer song" which aired in 2011.

The song's structure is very similar to Jerry Lee Lewis' "Great Balls of Fire", but there are some differences too. It is in the key of C Major, with a tempo around 158 bpm. The chord progression is a basic 50's era three chord progression type, but each verse begins with the iV chord instead of the I. A big difference from the original is EBoF includes two big musical crescendos, where the music builds to a fever pitch in intensity. The instruments used in the music are piano (obviously), bass, guitar, and drums. It is not known who actually played on the recorded track for this song though. We do know Christopher Cerf performed the vocals, and Tony Geiss wrote the lyrics and made the song's arrangement.

Lyrically the song is about the eight furballs, and mentions how furry they are and how they love to dance to rock and roll. The line about "grow some hair on a billiard ball" is actually an old joke about sasparilla advertising by saying its so strong it could grow hair on a billiard ball. "Bushy as a lions mane" is another expression about something having thick, shaggy fur.

They're roly-poly and they're fuzzy too, they love to boogie even though they're blue!

They've got the beat! And they've got feet! Holy-moly! Eight balls of fur!

They're just as bushy as a lion's mane, and just as curvy as a drop of rain!

They've got the soul, for rock and roll! Holy-moly! Eight balls of fur!

Whoooa baby! They're made of fur! And not of wood! They like to boogie like a fuzzball should!

You get some music and you hire a hall, then grow some hair on a billiard ball!

What have you got? You've got alot! Holy-moly! Eight balls of fur!

Eight little fellas that are made of fuzz, each of 'em doin' what the other does!

They've got the soul, for rock 'n roll! Holy-moly! Eight balls of fur!

-spoken after the song's ending-

Hey Matt, bring in the next piano, would ya? Okay fellas, take eight.

A brief clip of the music shown on the filmstrip for the introduction to Sing Yourself Siller at the Movies.

Variation as on the filmstrip from Sing Yourself Sillier at the Movies.

A clip from the Sing Yourself Siller at the Movies trailer.

Oscar and Telly chat before the music video starts on Sing Yourself Siller at the Movies.

A set of eight furballs.

Furballs and the flashing 8's

The piano gets it

Ok fellas, take 8!
Add a photo to this gallery 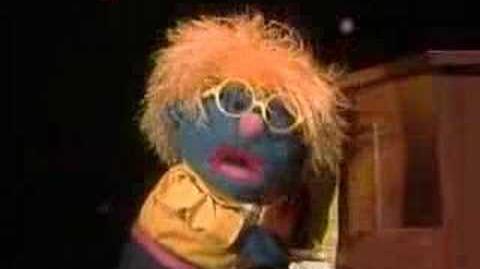 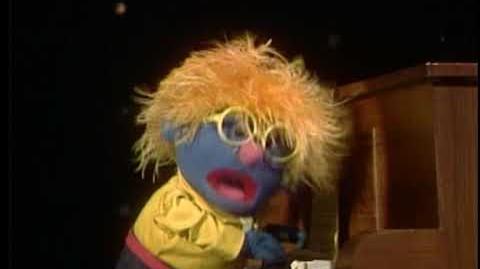 Retrieved from "https://musicvideo.fandom.com/wiki/Eight_Balls_of_Fur?oldid=389347"
Community content is available under CC-BY-SA unless otherwise noted.